My name is Toby Osbourn and I am a Developer at ExamTime. When I’m not producing some of the best online study tools, I like to write about development and startups.

Last week I was fortunate enough to have the chance to attend the Dublin Web Summit 2013, a conference aimed at showcasing top tech talent and having meaningful discussions around the tech startup scene and culture.

The Location and Setup 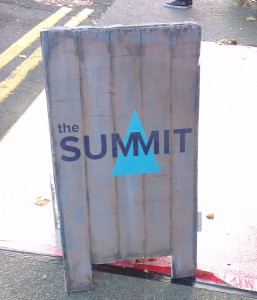 As was the case last year, the Web Summit was held at the RDS arena in Dublin. It’s a fantastic space for a large scale conference and the location is incredibly handy in that there are plenty of places to stay and eat nearby.

The setup was great with one very large main stage and several smaller niche stages such as the Developer Stage and the Cloud stage. The bulk of the space was taken up by two massive areas for startups and businesses to showcase their products. I will be hitting on some of the ones that impressed me and why below.

There was plenty of information available on large “You are Here” maps and from the incredibly helpful staff. At all times I felt that I was being looked after and given the most relevant information. 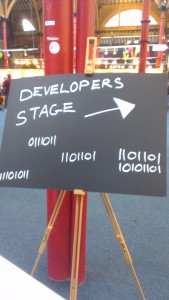 Being that I am a developer, I obviously spent most of my time at the Developer Stage, this was outside in a sort of tent/marquee setup that at times gave the impression it might take off!

I will be writing up separate posts that go into a lot more detail about specific talks, but I wanted to briefly mention some of my favourite Developer talks from the two days.

Alex Shirazi talked about the Developer-Designer relationship and how, when developers and designers work well together, great things can happen. He also took some time to explain how a company’s brand isn’t just confined to the logo, it is about every interaction with their application or website. 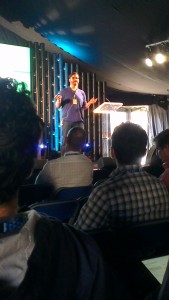 Chad Fowler gave an inspiring talk on how software should try and mimic nature and how, in nature, cells die and get replaced all the time, but in software development if one cell (section of code) dies it will normally cause havok. He suggested that we should strive to turn our systems into large amounts of very small bits of code that could easily be re-written or replaced.

John O’Donovan gave a fantastic talk on the Semantic Web, something I personally put a lot of stock into. He mentioned some of the issues that large scale websites like the Financial Times have when it comes to correctly storing and labeling data so that it’s useful for people at a later date.

Most of the talks from the Developer Stage are available online.

There are two talks from the Main Stage I want to briefly mention:

The first talk I want to mention was nothing short of inspirational, it was a talk by Scott Harrison about his project, charity: water. He talked very personally about his life spent working around nightclubs and wasting most of his time spent drunk and how he turned his life around and started working on a mission that no one on earth should have to drink water that may kill them. He set up charity: water and broke many of the normal charity conventions, for example, 100% of donated money goes directly to helping, nothing is skimmed off for admin. It truly was a fantastic talk and such a worthwhile idea. 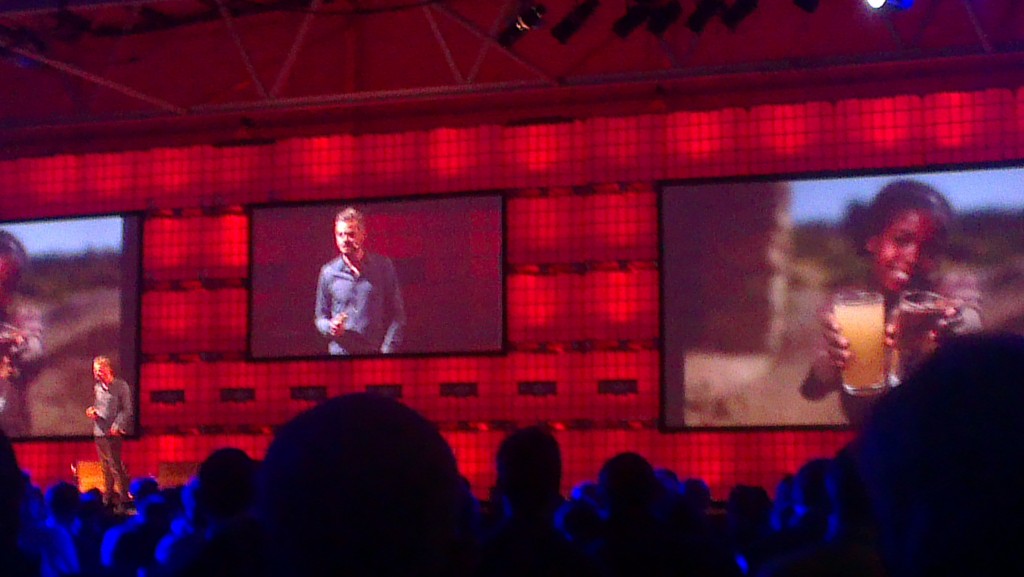 Secondly, I couldn’t talk about the Web Summit 2013 without mentioning Elon Musk! He talked with the Irish Prime Minister Enda Kenny and Shervin Pishevar about a range of topics that included him giving Mr. Kenny some advice on what needs to happen for Ireland to improve itself.

There were many, many more excellent talks. Check back to the ExamTime blog soon for more detailed writeups of some of the talks.

It felt like there were maybe double the amount of startups attending this year as there was last year with each one being given just enough space to have maybe a couple of laptops and a large monitor to showcase what they have been working on. With so many crammed in I thought it would be difficult to get around them all, but due to the space afforded by the RDS it wasn’t too bad.

I could talk for days on some of the talent I spotted over the course of this conference, but I want to highlight two that jump out. 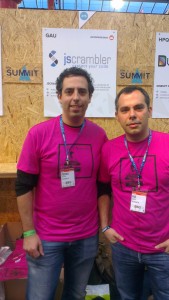 The first is JS Scrambler, a Portuguese startup with the mission of protecting your intellectual property that might be hidden within your front-end code on your website. Essentially, because anyone can have a look at your website’s source code they could see the business logic tied up in your JavaScript, which for some folk might be complicated enough that security vulnerabilities might exist or competitive advantage might be on display. I have mixed feelings as to if I would advocate this approach or not, but their explanation was sound and they have been doing this for long enough that I have faith in their ability to deliver.

The second was Nexed, a Canadian company empowering children to learn by making a game for them. The game is not dissimilar to World of Warcraft if anyone has played it, only all the missions focus on studying and are set by the teacher. I had a demo of the idea and see how flexible it was and was very impressed. I also seized the moment to talk about ExamTime and was delighted to hear that they seemed to really like us!

One half of the food really impressed me, the other half not so much.

First, the positives! Like last year there was fully stocked fridges of soft drink that were free to dip into for all attendees, as well as tea/coffee stations complete with pastries. I really liked this as it showed the level of thought that was put into the comfort of attendees.

Last year the main food area was inside and it was pretty good, this year it was moved outside and away from the main arena, this is almost certainly because they had to try and feed 10,000 people! So apart from having to walk to get some grub, the other problem was that there was massive queues everywhere for the food. It wasn’t a great experience and was the first time you really felt confined. I also have a slight issue with how it was billed as Ireland’s best food. It was good, but it wasn’t amazing stuff if I am being honest. I mean all power to the folks that put a lot of effort into feeding everyone, but I think it was maybe bigged up a little too much during the event itself.

I enjoyed the conference a lot, and whilst there might not have been too many actionable takeaways, I don’t think that was ever the intention – I very much hope I have the opportunity to attend again next year.

Did you attend the conference? If so we would love to hear your thoughts, and if you didn’t for any particular reason I would also love to hear why not.