“This blog is the part of the “ExamTime New Skills” series which aims to provide info, tips and resources on how students can teach themselves new skills in their own time.”

“The omission of women from the history of Computer Science perpetuates misconceptions of women as uninterested or incapable in the field” – Jennifer S. Light

Historically, the role of women in any discipline, in society in general, has been squashed in favour of male accomplishments and this has been true of programming and computing in general. The consequences of this are that many women don’t see a place for themselves within this vital new area of society.

However, there are women who have defied the statistics and made a huge impact on the world of technology and coding. Read examples of great female coders and the contributions they have made to the computer sciences below:

Ada Lovelace was an English mathematician who is regarded today as being the first computer programmer. She wrote the first machine algorithm which she wrote for Charles Babbage’s Analytical engine. She described herself as a ‘poetical scientist’ and followed her curiosity down many different paths. Ada constantly returned to ideas revolving around computer programming though and her impact on modern computer science can not be underestimated.

In 1946, a team of 6 women programmed the world’s first electronic computer; ENIAC (you can read a very interesting article of the team here). There names were: Kay McNulty, Betty Jennings, Betty Snyder, Marlyn Wescoff, Fran Bilas and Ruth Lichterman. At the time they were largely overlooked and credit was given to the men who built the machine as opposed to the women who actually programmed it. However, in 1997, they were inducted into the Women in Technology International Hall of Fame.

In 1952 Grace Hopper created the first language compiler. She was an American computer scientist and United States Navy officer. A pioneer in the field, she was one of the first programmers of the Harvard Mark I calculator, and she developed the first compiler for a computer programming language. Without Grace, or ‘Amazing Grace’ as she was later nicknamed, the concept of a computer compiler and languages such as COBOL wouldn’t exist. The benefit of these is that code is easier to read, maintain and has faster development time. Grace had a major impact on the development of computer sciences due to these contributions and innovations in the field of computer science. 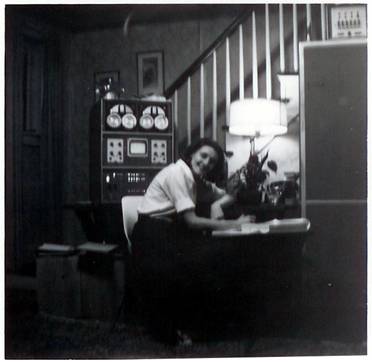 Mary Allen Wilkes is best known for her work on the LINC system which is regarded as the ” great-granddaddy of all the personal computers”. She is regarded by most to be the first person ever to use a ‘home computer’, as you can see in her picture. Her biggest individual contribution though was that she created the first operating system. Without  Mary Allen Wilke’s work on developing operating systems, the modern PC as we know it wouldn’t exist!

These additions alone can be seen as forming the basis of much contemporary computer science; the current coding movement is built on the benefits of these additions.

For any girls out there who think they would like to learn to code, you should check out some of the organisations listed below or have a read of the other blog posts in our “Learning to Code” series for more resources – you will find the full list below under Related Articles. And for those who are skeptical about learning to code, if these 12 years old kids can do it and do it brilliantly, then so can you!

If you want to find your place in the coder movement there are a number organisations that endeavour to help counteract this under-representation of women in the computer sciences. Organisations such as Girls Who Code , The Ada initiative , Girl Develop It, Girl Geek, The Raise Project, Black Girls Code and Code Ed.

All these organisations ( and many others) all focus on different areas and approach the problem in their own way but they are all working toward a common goal; to increase awareness, participation, recognition of women who engage with the computer sciences.

If you agree that the number of female coders needs to increase then share this post and get the word out. You can join the conversation on Facebook or at #ETNewSkills where we will be sharing and discussing all things coding!