A concept map and a mind map are sort of like twin brothers – although almost everyone knows they’re different, very few people can actually tell one apart from the other.

However, as happens with twins, once we become more familiar with them, we suddenly start to see that they have subtle yet significant differences.

So we decided it was high time to tackle the question: ‘Just what is concept mapping?’ and take a closer look at what sets it apart from its twin brother, mind mapping. In addition, we’ve got some tips that will help you easily create valuable concept maps of your own whether you’re a teacher, student, instructional designer, or an engineer.

What is a Concept Map?

A concept map (sometimes referred to as a ‘concept diagram’) is a graphical plan that aims to illustrate the relationships that exist between certain concepts. Concept maps are effective learning tools because they allow you to plot sometimes complex information in a more visual way to give you a more concise overview of a particular topic.

So far they seem similar enough to mind mapping, right? Well that may be somewhat true, but when you look a little closer you’ll notice that concept maps have a number of features that are absent from mind maps.

One of the main differences lies in how the two are structured. Mind maps follow a radial structure in which the child nodes (those little boxes of text) surrounding the central node and are developed outwards.

In a concept map, however, the structure of information is hierarchical – that is, information is presented in a top-down manner, beginning with the general and working down through to the specific. This basically means that the ideas or concepts on the map are presented in a clear order of importance.

No. 2 Multiple connections between nodes

It’s probably fair to say that concept maps generally allow for more complex structures. This is largely due to the fact that whereas mind maps have just a single parent node, with multiple child nodes linking to it, concept maps may feature several nodes or groups of nodes at different levels.

As a result, there is much more scope for cross-linking relationships in a concept map, making them ideal for helping students to develop a firm grasp of particularly intricate areas of study.

No. 3 Greater emphasis on text

When it comes to application, mind maps can probably be used with a greater variety of subject areas and concepts. They tend to incorporate visual aids to enhance their appeal whereas concept maps are usually more text oriented, making them valuable for deepening student understanding in formal, academic contexts.

When Using a Concept Map

As mentioned above, concept maps are ideal for representing hierarchical structures or concepts that go from the general to the specific.

For instance, say you are studying the animal kingdom. When using a concept map, you could sub-classify animals into groups such as vertebrates and invertebrates. Within these two groups you could continue creating further sub-divisions until you arrive at a specific species (Vertebrates > Warm blooded > Mammals > Omnivores > Placenta > Humans.)

However, for the development of ideas that start from a parent node, the use of mind mapping is often more appropriate.

Although GoConqr features a tool specifically designed for creating mind maps, many of our users also use it to create concept maps, with hierarchically structured content and a greater emphasis on text than on images.

But if you want to create a high-quality concept map that connects nodes with words and assigns more than one top-level node, you’ll need to use a little creativity and a couple of tricks, which we’ve detailed below:

To insert some explanatory text onto the branches connecting two nodes, you can create an invisible node. Thankfully, this doesn’t require any magic, just a minor adjustment as you make the node the same colour as the background so that the shape disappears while the text continues to display as if it were floating between nodes. 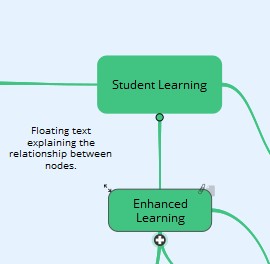 While you cannot assign more than one parent node directly in GoConqr’s Mind Mapping tool, you can easily find a way around the issue by creating overlapping nodes to produce the same effect (i.e. they can have multiple relationships). Just be sure to use the same node text, colour and size so it goes in naturally. 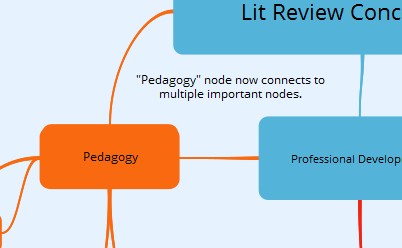 Here is the full concept map created using GoConqr. Click play to see how it was made, or click on it, hold and drag with you mouse to move it around to view all nodes:

Using techniques such as the above gives GoConqr users greater versatility to create a range of schemes and alternate educational resources to suit their own requirements.

For a quick overview on using the features of GoConqr’s Mind Maps tool, watch the tutorial here. Or if you feel ready to get started right away, simply sign up for free and get going.